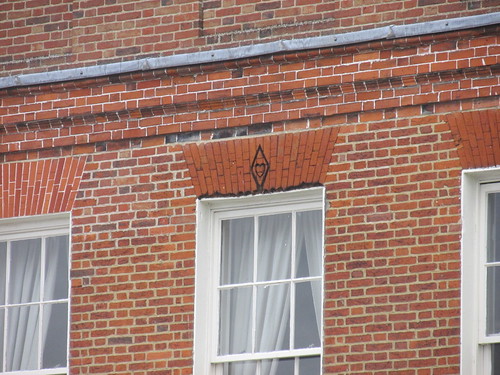 As I promised I have just one more tale to tell you of Kings Lynn. One of the main squares in the town is the Tuesday Market Place (There's a Saturday Market Place too.) and the boundaries of the square feature some attractive old buildings. On the north side is a large red brick house with segmental arches above its windows. On the keystone above one window is a carved diamond with a heart at its centre. The mark is known as the witch's heart.

In 1590 townswoman Margaret Read was accused of witchcraft and sentenced to be burned at the stake in the public execution space at the Tuesday Market Place. She protested her innocence, but to no avail, and the execution was carried out as ordered by the court. She swore she would be avenged against her accusers, and on the morning of her death, just as the flames reached her chest, her heart burst through her ribs and marked the house of the Chief Magistrate who had condemned her.


There is, of course, one significant flaw in this story. Witches in Britain were rarely burned at the stake, in spite of all the stories you've been told. They were hanged.
Posted by The History Anorak at Friday, January 22, 2016

Why not add your two pennyworth?


Want to read a novel by a new author? Give this a go.